In what way may I create an artifact that allows me to take better and more immersive video with regular digital cameras while doing action sports (ie. cycling).

Before I show you my final alpha prototype, I would like to show a couple of experiments and earlier prototypes of my concept, which is a chest harness that could be suitable for any kind of DSLR cameras.  In this way, you could see the evolution of the concept. You can click an image to see a larger version if you wish.

As you can see, I first experimented with a borrowed GoPro harness and a lot of zipties, foam and adhesive tape. While the prototype was useful to test the viability of the idea, it didn't look very nice and couldn't fit larger DSLR cameras. For that reason I began trying out DIY concepts which better addressed my gap.

So, after many several iterations which involved addressing the key and primary user needs, I finally came out with the alpha version, for which you will see some photos below.

First, I will show the front side of the Alpha Prototype. 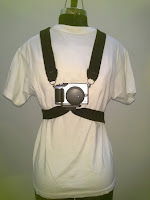 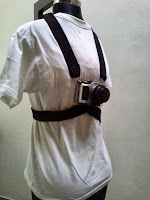 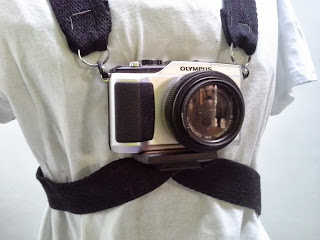 I ended up using a thicker and more resistant fabric belt for the straps. Also, I used an old tripod foot which I attached to the belt. The camera could be easily fastened and mounted in the harness that way. Below you will find the back of the harness and also some more detailed pictures. 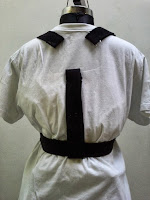 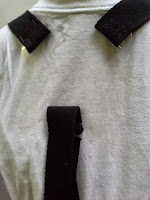 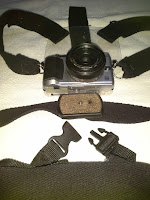 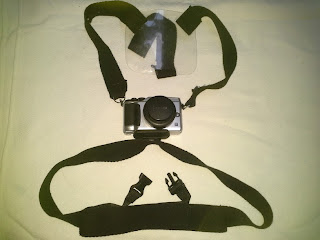 After using this alpha prototype a couple of times, I think it does a pretty good job on addressing all of my primary using needs. I think I could improve it by making it more adjustable (more adjustable straps) and reinforcing the back plate, but as of now it has been fully functional.

OK, so from all 10 concepts explored, the Chest Harness mount was the selected one. As you can see from the earlier prototypes, a lot of change have been introduced in the iterations for my artifact. Specifically, I improved the overall quality of the prototype by using thicker and more durable materials.

Also, I used an old camera mount instead of the metric screw I used before, since it does a better job on fastening the camera to the straps. Another new modification I introduced was the plastic back plate, which improved ergonomics and overall stability. The camera is very tough, durable, and inexpensive. Overall cost of the product was less than 10 US Dollars, and it could be even less (I bought the materials at a quite expensive specialised store).

I used the alpha prototype a couple of times this week to fine tune it and better understand possible improvements. I could improve it by including an adjustable mechanism for each of the straps. I think that may be my last modification before the final product, although I want to test it more this week.